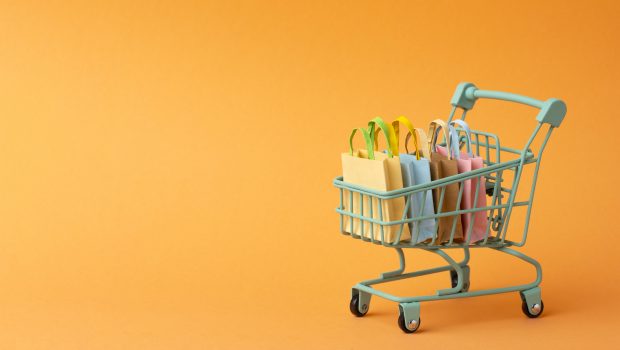 Retail media is a ten-year-in-the-making ad market. It has taken the rise of e-commerce, shifting trade budgets, and the explosive growth of Amazon's ad business (estimated in 2022 to be around USD$30bn) for online retailers, marketplaces, tech vendors and buyers to invest resources into the area.

The multi-billion dollar/euro/pound channel emerging in retail media now seems to be on everyone’s radar.

Is it retail media or commerce media?

Before jumping into the specifics of the retail media space (tech infrastructure, fragmentation, aggregation and buying/inventory management strategies), it’s important to settle on a proper definition.

At ExchangeWire we see retail media as advertising on a retailer or marketplace site; app or web-based property. For it to fall under the retail media category, the product being advertised must also be sold on the property that the ad is served across.

Commerce media is frequently - and confusingly - interchanged with retail media when describing this emerging space.

Retail media, on the other hand, is a totally new area - and represents the true green field opportunity for the industry at large.

Scaled walled gardens are driving retail media adoption, but the opportunity is much bigger

Amazon’s ad business is probably the big reason why retail media is growing. The majority of its ad revenue is coming from product ads on Amazon.com.

Emarketer’s retail media numbers over the coming five years mirror Amazon’s expected ad revenue growth. I think this is a little reductive when it comes to understanding the true potential of the space.

Amazon is pulling the budget from a new pot of money. It is not coming from display, social or search - YET. This is traditional trade budget spend that previously sat with large retailers, allocating it not only to in-store marketing but also online.

What we will see next is thousands of mid-tier online retailers and marketplaces launching their own retail media solution, creating a whole new class of addressable media. The retail media segment is going to outgrow Amazon very quickly.

Ad inventory fragmentation and the need for sell-side ad infrastructure

There is going to be a huge problem around aggregation, as buyers try to manage spend across multiple marketplaces and retail sites.

I see three buying scenarios for marketers and agencies: 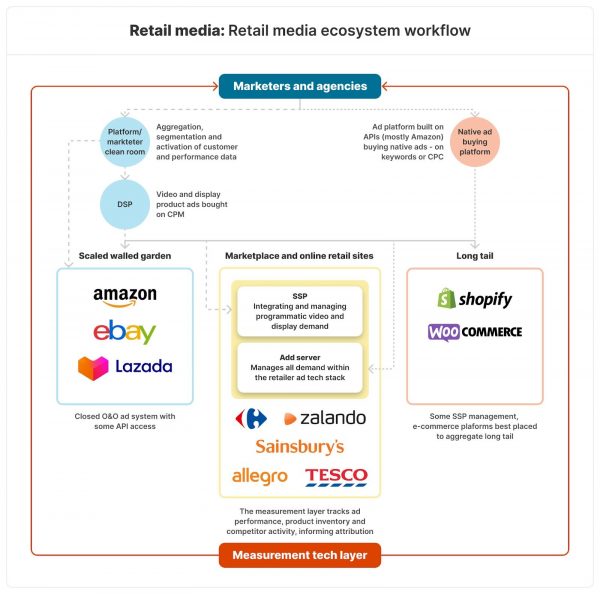 I want to expand on scenario two - marketplaces and online retail sites - as it is the one that applies most to our readers. I see retail media as a natural sector for ad tech growth outside the US.

Right now the entire non-US retail media supply side is a mess. Applying programmatic technology to this fragmented ecosystem, that includes thousands of retailers and marketplaces, will open up huge revenue opportunities for the sell side.

Advertisers are going to invest a lot of spend in this e-commerce/marketplace segment for two specific reasons: that massive trade budget needs to migrate online where users are buying their products; and, most importantly, the addressability that links ad performance on to actual sales is going to attract outcomes-based budgets.

Beyond product display ads, you will see growth in product video ads. Innovative creatives, like conversational media units and product recommendation, will also see a lot of adoption - particularly the former, as the advertisers look to engage customers.

The product video and livestream ads are a pretty awful standard (just go see for yourself on Amazon). Expect to see an improvement, as advertisers experiment with new tech to improve both engagement and optimisation.

The measurement tech layer is critical for the buy side

I need to reiterate that retail media is not simply about serving ads on an e-commerce website, wrapped around some ID-based retargeted segment that’s underpinned by an upper funnel metric.

For campaigns to be successful in retail media, a buyer will need to consider in relation to media execution, targeting and building ad attribution:

Startups are already emerging to provide this measurement data to buyers. Retail media is very much an outcomes-based channel. As such, we will not see the speculative cookie-/ID-based solutions migrating across from ad tech.

It’s hard to imagine any retailer or marketplace transmitting data via an OpenRTB integration. Can you imagine the segmentation field day a Google or Amazon would have with that competitive data? A cautionary note: it’s important to have neutral players in your stack at all times; not a competitor.

Clean rooms will play an important role in retail media as the burgeoning ecosystem scales. Both the platforms and marketers will have their own tech. Most in the mid-market will be interoperable, pushing segments from one clean room instance to another.

Both retailers, marketplaces and brands will either partner with third-party solutions or build their own. Here are the reasons why:

Clean rooms are already making an impact in the programmatic space. The recent partnership between Boots and Infosum is a clear sign that this technology will be a core part of the data infrastructure as the retail media channel grows.

Retail media’s time has finally arrived. It is a first-party, intent-based environment, that is still in its early days of development. The exciting part: it’s a huge area of new growth for online retailers, marketplaces, the service layer and ad tech.