ExchangeWire Research’s weekly roundup brings you up-to-date research findings from around the world, with additional insight provided by Rebecca Muir, head of research and analysis, ExchangeWire. In this week’s edition: GDPR misconceptions; Consolidated ad fraud; and State of marketing automation.

With less than a year to go ahead of the 25 May, 2018 deadline, only 17% of respondents have taken all of the recommended steps towards GDPR compliance, while the same proportion admit they have not enacted any such checks or changes.

Over a third of marketers (34%) incorrectly think individuals over the age of 70, and those who have not been responsive for 90 days, are exempt from all automated marketing decisions. Almost half (44%) of respondents claim businesses that employ over 250 staff must appoint a chief data officer, despite this only being a requirement where data is of a particularly sensitive nature.

The majority of ad fraud is concentrated in a small percentage of sources within the RTB programmatic market, according to a study by Fraudlogix.

The report finds that 68% of fake impressions came from just 3% of publishers. Additionally, it found that those sources that generated the highest percentage of fraudulent impressions contributed a disproportionately high amount of impressions to the RTB market.

Sites with more than 90% fraudulent impressions accounted for only 0.9% of publishers, but contributed 11% of the market’s impressions. This signifies how detrimental fraudulent publishers can be to market quality, as sites generating fake impressions can quickly outpace sites sending real traffic.

Overall, the study found 18.8% of impressions to be fraudulent. An impression was considered fraudulent (or fake) if a combination of digital and behaviour characteristics synonymous with ad traffic generated through fraudulent means such as bots, scripts, hijacked devices, and click farms was detected.

The six biggest technologies hold over 57% of the marketing automation marketshare, finds a study by SimilarTech and Bold Digital Architects. 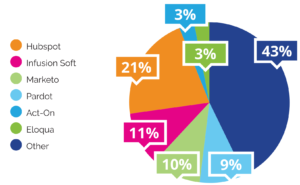 Hubspot was found to have the largest marketshare in 2016 (21%). The total number of websites using marketing automation technologies in 2016 has increased to 482,765.

- Marketing automation is most popular among B2B companies

- Most billion-dollar companies (enterprises) use Marketo

- Pardot has seen the largest growth in 2016 with an astonishing increase of 108.9%. The rest of the six dominant technologies averaged a growth of 48%

Among companies that generate between USD$1m-USD$10m annual revenue, despite being a rather small player, Infusionsoft surpassed Marketo in this market share. This might be the target market for Infusionsoft, since we hardly see any usage among bigger companies.