The Road to ATS London is a series of specialist posts on technology, data, and the business models emerging in the programmatic ecosystem, which are all topics that will be featured at ATS London. Tickets for ATS London on Monday September 14 are now on sale. We do sell out every year, so make sure you get your ticket while they're still available.

It is the age of the faux-publisher. It has become next to impossible to build a scaled organic audience when only two companies, Google and Facebook, dominate traffic distribution on desktop and mobile web. Both are still the biggest sources of traffic for most digital publishers. Internal strategies like the obfuscating of analytics data and recent reports, suggests that both have started to throttle traffic to push publishers towards paid-for advertising options.

The business thrived, but was totally dependent on the goodwill of Google. Eventually Google took umbrage with Demand Media's spammy content offering and proceeded to crush its traffic in a series of search engine algo updates.

It is never good to be dependent on one traffic source or platform. Eventually they will throw you under a bus.

Despite BuzzFeed's dependence on Facebook traffic, its monetisation model is one to be admired. It has gone all in on the 'native' monetisation (in other words, sponsored content writ large). Buzzfeed is a strange mix of agency and publisher: campaigns are planned on behalf of the brand/advertiser and executed through the Buzzfeed channel on website traffic mostly aggregated from third-party sources.

It's a high margin business – with reports suggesting it will do USD$100m+ in revenue this year.

Can this Facebook-dependent traffic model be copied? Highly unlikely. Facebook will doubtless crack down on the increasing amount of spammy content being shared through its platform.

However, with Facebook and Google actively choking traffic distribution, is there anyway publishers can circumvent the big two as well as execute a high-margin Buzzfeed monetisation model?

Yes there is – and it can all be done through programmatic.

WatchMarvel was launched about two years ago. This new premium publisher brand focused on luxury watch reviews. It had a staff of two industry-specific writers based remotely. The thinking here was premium audience and context – and the high-end site design reflected it.

WatchMarvel was part of an experiment to see if you could scale or automate the monetisation of premium content sites. The key problem was traffic. It had a decent following on its Facebook page (mostly acquired) but its referral traffic on content posted through the page was poor.

Was this to do with the paucity of quality of its followers or Facebook throttling? Who knows? However, it wasn't going to scale through Facebook.

Google was proving an even more difficult source to garner organic traffic from. Product reviews – even those useful ones – will never get love from the Google search algo. It had but one option: buy traffic in.

Identifying reputable traffic-sellers is a difficult process in this industry. Fraud and bots are everywhere. A rule of thumb would be: if you are buying traffic – on desktop anyway – for less than 5¢ you can safely say you are swimming in murky waters. In any case, you'd hope traffic auditing companies like Integral Ad Science are working with your demand partners.

WatchMarvel went with Taboola and Outbrain initially to test the viability of its monetisation model, which I'll explain later in the post.

It set up classy click-bait across both their networks. Slideshows like "The 10 Most Romantic Watches In The World" worked very well in terms of driving traffic and clicks. However, the process was too manual and resource heavy. More automation was needed to make it viable.

WatchMarvel's monetisation model was a classic yield arbitrage one: effectively buying in cheap traffic and serving high-paying advertising sold by third parties. It had no sales team – and as such, had no direct sold (a requisite I think if you want to maximise revenue).

The other pain point in the model was DFP. While it has many admirable features, DFP's inflexibility around holistic ad serving frustrated the success of the project. Dynamic allocation is pretty much all about Google. The third-party sellers were set up as line items within DFP at specific prices.

In most cases they would take the impressions, but if they didn't, it would be passed to the next line item in the chain.

You do have the option of switching on 'Dynamic Allocation', which allows Google to see if there is a bid available for that impression in AdX – but given it's a second-price auction with two demand sources in it (line item and AdX) Google only has to bid a penny more to win the impression.

What WatchMarvel really needed was to open up all its supply to all forms of demand: ad networks, exchanges, DSPs, et al. This would facilitate effective yield management.

Of course direct sold (native, of course) would have papered over the cracks of both DFP's and programmatic's obvious deficiencies, but this project was all about 100% automation.

Using Taboola and Outbrain was too manual to really make this project scalable. The real opportunity was in leveraging programmatic and real-time buying techniques. To make this project work on an automated basis WatchMarvel needed to buy clicks in real time and optimise against its RPM - or a specific metric associated with individual user activity.

Is that possible? Not quite yet. But what if you could somehow plug in an ad forecaster, as well as DFP data, and optimise the buying strategy for the automated model? It is not exactly real-time yield optimisation, but it would help in pushing revenue.

The other big piece it should have focused more on was data. What they didn't do was segment users on the site and ascertain their behaviour – interaction with content and advertising.

This could have also helped in identifying quality traffic and users that would make money – effectively aping the Criteo model for premium content. Getting "performing" traffic via prospecting is not an easy task, and there are few doing it well in the industry.

It is worth noting that WatchMarvel was a premium niche publisher brand with original content and an identifiable audience. Trying to scale the monetisation opportunity through traffic arbitrage was the logical course of action to take.

Using data, tech and the programmatic eco-system, new publisher start-ups now have the means to not only circumvent the Google and Facebook organic traffic roadblock but also generate revenue.

In the video below, I outline the WatchMarvel concept with Rebecca Muir, ExchangeWire's Head of Research and Analysis. 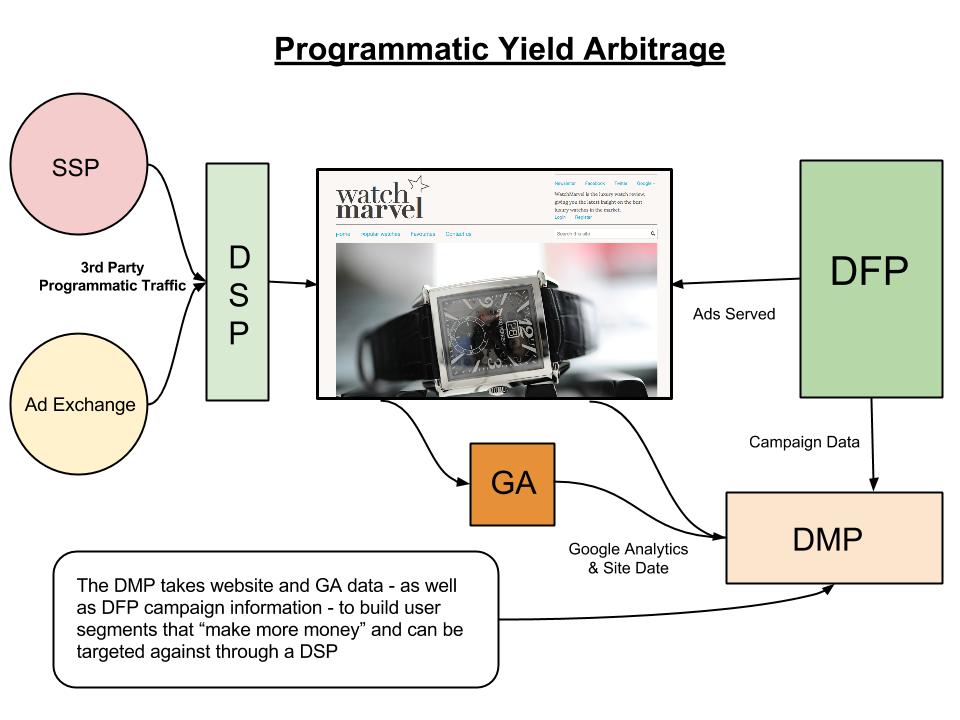