91% of UK Millennials own a smartphone

Across the UK, US, and Canada, social networking and entertainment account for 40% of time spent on digital media. In all three markets, the vast majority of social media consumption occurs on mobile apps, driven largely by smartphones. Apps are the dominant way to access social platforms on smartphones in the US, accounting for 57% of all social media time spent. Smartphone apps are also preferred in Canada (47%) and the UK (47%), however, these countries index significantly higher than the US on desktop and tablet for their social media usage.

Whilst behaviour across these three markets appears similar in terms of the use of different devices, the study revealed that the same cannot be said for website properties, highlighting the importance of local media planning. For example, whilst Google is the most popular site in all three markets, Microsoft sites are more popular in Canada and the UK, compared to the US, and CBS Interactive is far more popular in the US.

Longer ads are more likely to be viewed to completion on desktop devices. Taylor Schreiner, VP Research at TubeMogul said: "We compared drop-off over time for standard and mobile ads and found that completion rates taper steadily on desktops, but fall dramatically on mobile devices." 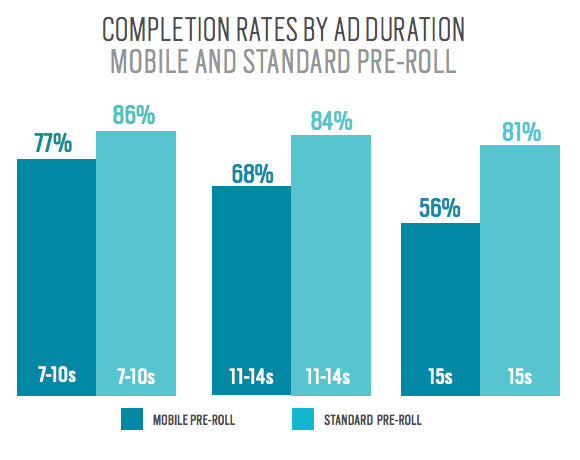 In the US, mobile users appear to view content evenly throughout the weekend on both phones and tablets, with mobile ad viewing spiking during holiday weekends, allowing marketers to engage with consumers on the go.

Weekend mobile usage in the UK spikes between 7-10am, a trend that marketers should take advantage of with day-parting targeting strategies. Holiday weekends see a 86% increase in viewing figures, compared to an average weekend, which should be taken into consideration when setting frequency caps and sequential marketing strategy.

The use of flash-based ads (instead of HTML5) resulted in 5.35 billion rich media ad impressions being wasted in Q1 2015, according to the Sizmek Mobile Index Report. More than 10% of advertisers failed to serve a single successful rich media ad to a mobile device in Q1.

When Flash is not supported, an ad ‘defaults’ – in other words, a static image is served in place of the rich media. Flash-based ads had a default rate of 98% on mobile, while HTML5 ads only default 8.3% of the time. Furthermore, HTML5 ads had a 400% higher interaction rate than Flash-based rich media ads.

The extensive use of Flash for mobile ads, despite high default rates, appears to stem from the dominance of Flash on other devices. Desktop saw a much lower default rate, with 60% of advertisers having an ad default rate of less than 3%. The report highlights that if this trend continues, 33 billion Flash impressions will default in 2016, resulting in 400 million fewer interactions, leading to the prediction that HTML5 will become the standard delivery format. Andy Kahl, director of research at Sizmek commented: "By converting rich media ads to HTML5, brand advertising can ensure that their ads are seen as intended, thus increasing return on their ad spend." 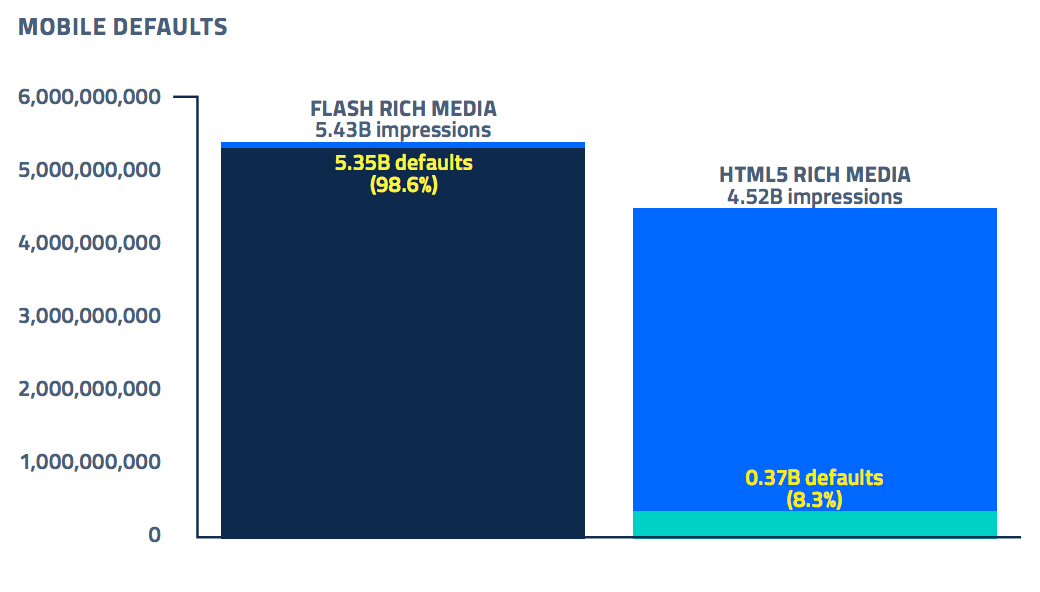 Interaction is nearly five-times higher on desktop than mobile (7.14% vs. 1.44%); whereas mobile ads have a higher CTR. This could be because Flash-based ads are frequently defaulting to static ads on mobile devices, leaving clicks as the performance measurement.

Display impressions on mobile devices have almost doubled from 2014 to 2015 (15% to 28%). This increased opportunity is a result of the consumer and publisher behaviours. However, marketers will only be able to capitalise on this opportunity if they convert their rich media campaigns from Flash to HTML5. This move will allow full-screen takeover ads, which Undertone found drove a 124% increase in brand recall.

58% of consumers use retail apps

When shopping, 58% of consumers are using retail apps, research by Epsilon reveals. Retail apps are versatile in the journey to purchase, with consumers using them to create shopping lists, look for coupons, check product availability and, most importantly, check how competitive a store's pricing is.

Both Millennials (42%) and Boomers (60%) use apps to find in store coupons; the most commonly used coupon apps within the US are Groupon (54%) and Retailmenot (44%). Whilst Boomers tend to be encouraged to buy something if they have a coupon, Millennials tend to actively seek coupons for products they want with one respondent claiming: "I don’t buy anything unless I can find a coupon for it".