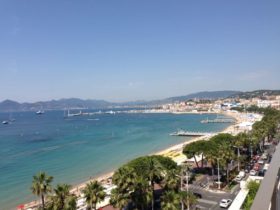 Speaking with ExchangeWire at Cannes Lions, Dave Reed, MediaMath, managing director, EMEA, discusses the role of ad tech at the advertising industry’s flagship event for creatives, as well as improving the reputation of ad tech among marketers.

So what exactly is the role of ad tech companies at a traditional ‘creative’ festival such as Cannes Lions?

What we’re witnessing is a global phenomenon of the melding of industries and ideas. You have a lot of creative agencies attending things like CES, and people like us coming to Cannes Lions, and I think what we’re seeing is a return to the old days in the 1950s, etc, when media planning and execution, lived side-by-side with copywriting.

It used to that when David Ogilvy came up with a creative idea, he knew exactly where his TV guy could get it [the ad placement] in a unified way. But then everything started to develop in silos, and for a long time there wasn’t the technology to put all these things together. This led to a slow cycle of feedback [on campaign performance].

We’re at the the stage now where creative part [of the advertising industry] is starting to take an interest in these the technologies, as they realise they enable them to talk to their consumers, to see how they can get creative around that and carry out some brand stewardship.

We [the ad tech industry] are the execution layer of that, as we can pull of the data out and feed that back into the creative process.

Are we a creative enterprise? No. But are we a fundamental part of the creative process? Most definitely.

Also, Cannes is not a bad place to be.

What is MediaMath’s key message at a creative festival such as this?
We’ve recently had a marketing brand relaunch, with the message that it’s outcomes that matters. For instance, if you’re a company in the travel business, bookings are what matter.s, not just click throughs. The new tagline is ‘performance reimagined’, and ‘marketing reengineered’.

What kind of conversations are you having at the festival?
So basically, we are looking to show how technology can show users ore relevant advertising, and how you can do so using first party data, to tailor creative execution.

There are also a lot of sub-themes, such as finding the right proxies for things like brand uplift in an advertising campaign, and then measuring how you you can track this all the way to things like in-store conversion.

So what kind of people are you having these conversations with? Is it just with the usual clients, or are you meeting others that you wouldn’t normally meet with?
The vast majority of the people we’re meeting with are media agencies, and trading desks. But what we are starting to see here, is that there are a number of large brands that hear terms such as ‘DSP’, and ‘DMP’, and want to know more.

In these instances, a lot of the brands are already working with us in some way or other – either through Google or someone else in our stack – but in Europe in general the agency owns the relationship with the underlying technology.

In such a scenario, the agency will still operate everything but in terms of corporate procurement the brand will think, we want to own this relationship. That will start happening more, but that’s a couple of years out.

There have been a lot of research recently saying that brands are interested in learning more, but still don’t ‘trust’ programmatic. How do firms in this sector improve this?
It’s early days, and if you look at every technology in the ad tech space, they all go through an arc, and then they eventually settle and find their place in the valuer chain.

If you look at the ad server space, they tried to launch deals with publishers, that didn’t quite scale, and then we had the network model became prevalent, and they then became the stewards of the technology, but then people got a little bit uncomfortable about the opacity of that [model].

But then that’s when ad tech companies [like MediaMath] came in and started to treat it like the financial market and we applied the same principle to the digital mdi a market.

If I have to say where our arc is heading right now, I think the agencies are pushing the agenda along. So when a brands say: ‘Can we do some real-time bidding?’, the agency can point out that it’s already happening and then start bringing their trading desks in. And that’s where the education happens [and distrust begins to subside].

In other cases, there’s much more of a tectonic shift, if you look at WPP [with its trading desk Xaxis], it is now claiming that the media agency is now the trading entity, and the trading desk is going to be the supply-side managing the technology.

So the agencies are already pushing ad tech, and the brands are starting to bound in to them.

So what are your thoughts on the prospect of agencies being disintermediated with the rise of ad tech?
To be honest, MediaMath is agnostic, and not so concerned about who we hold the contract with. For contract paying, it does make sense for the brands to hold that, with the media agency managing things day-to-day.

We’re not that concerned about that, what we are concerned with is the attitude that RTB is synonymous with cheap inventory, that someone marks up opaquely.

But the industry is evolving its modelling, and how it pulls in offline data to improve multi-touch attribution, which is critical to improve transparency [and win over trust].