The internet’s first advert was served in 1994; this banner ad went live on hotwired.com, reading “have you ever clicked your mouse right here? You will”. This campaign spoke to the technological advancements ahead and the highly anticipated and limitless possibilities of the future. Fast forward to 2020, and online advertising has surpassed USD$340bn (£259.3bn), and accounts for over 50% of all media spend globally.

Alkimi Exchange has produced this Deep Dive in partnership with ExchangeWire. Alkimi are building the world’s first decentralised ad exchange, where: users aren’t a product; publishers aren’t at the behest of Facebook and Google; and advertisers can deliver their message with value using the principle of Generative Economics. The Alkimi Exchange will reward users, publishers and advertisers for rebuilding the intended value exchange of the Open Web. Fewer ads, better user experience, increased engagement.

At its core, programmatic advertising is an automated way to buy or sell online media using a combination of technologies. In this sense, it shares similarities with traditional centralised financial (tradfi) and derivative exchanges.

Buyers and sellers transact online media programmatically in 1/1000th of a second via preset strategies. Data is relayed between a webpage to multiple centralised servers to deliver an advert concurrently with content as the page loads.

However, this is where the similarities to tradfi end. There is no single source of reporting within the advertising market; so, unlike tradfi, where options contracts are paid out on NYSE reporting (for example), you have multiple parties reconciling enormous data sets.

Incumbents within the programmatic ecosystem created efficient means for trading ads online through the realtime exchange and bidding of user data, with quantifiable return on investment fuelled by rapid innovation.

As a result, the industry has become highly fragmented by technology providers offering a multitude of different services. However, the market is dominated by Facebook and Google, whose 'walled gardens' claimed a 53.3% share of all digital advertising spend (worth around $181.5bn). Several inefficiencies persist within the tech industry due to the reliance on centralised exchanges such as these platforms.

2021 saw an abundance of challenges for the digital marketing industry to contend with, including market insecurity as a global pandemic ripped through the industry, growing scrutiny of GDPR compliance, consumer data privacy concerns, and the continued phasing out of Google’s third-party cookies.

Google and Facebook are some of the largest consumers, creators, and sellers of data. Their advanced machine learning around their users’ data has solidified their market share. Independent technology companies have successfully offered alternative solutions to help publishers generate revenue.

However, they’ve exacerbated the issue by creating an ‘ad tech tax’: for every $5 spent by advertisers in 2020, a publisher received $2.55, and approximately one-third of supply chain costs were ‘completely untraceable’. In 2017, Marc Pritchard, chief brand officer for Procter and Gamble, referred to “a media supply chain that is murky at best and fraudulent at worst”. His words have been echoed, not just by other marketing leaders, but by regulatory bodies who have questioned Google and Facebook’s walled gardens and their role in creating a duopoly in the market.

But what does it mean? How did it happen and why is it so bad?

The partnership between Facebook and Google is not the first time the market has witnessed monopolies and duopolies; with the rapid innovation of the ad tech world, a lot of companies have been breaking boundaries, leading the market with their technological advantages. This is not unique to this market — it is present in every industry. However, when it comes to the online advertising market, Google and Facebook have a giant head start.

Google and Facebook’s head start has been successfully maintained due to the enormous barriers clients and media agencies face when entering the market. In recent years in particular, clients and media agencies have become totally reliant on the easy scale that the duopoly has provisioned, which enables an almost friction-free way of communicating to large audiences and accessing large amounts of user data. This makes it virtually impossible for any alternative solution to provide the same kind of offer.

However, this is not without its challenges and issues: in April 2021, an antitrust case filed against Alphabet accused Google of running a secret project in collaboration with Facebook ‘designed to give their clients competitive advantage over others by revealing exchange data not accessible by all”. By the end of July 2021, 35 states in the US filed a separate antitrust suit against Google, following these claims that the company engaged in illegal behaviour to maintain a monopoly on the search business.

We are now entering what we at Alkimi believe will be a huge period of change for the advertising industry.

Google is now wrestling with regular complaints from governments across the globe about its infringements of users’ personal data. Meanwhile, Meta — Facebook’s parent company — has reported that Facebook’s daily users have decreased for the first time in the platform’s 18-year history, and that the social media platform is struggling to adapt to the changes made by both Apple and Google which have affected its ability to attribute advertiser spend to device IDs.

“If history teaches us anything about monopolies, duopolies, or any other defined industry hierarchy, it’s this: Nothing lasts forever. Just ask AOL, Napster, MySpace” Mediaocean CEO Bill Wise stated. If Web 1.0 was ‘Read’ and Web 2.0 was ‘Read and Write’, Web 3.0 is about the user: the user of your site, the user of your brand, and the user as your reader. Web 3 will allow users to take back the sovereignty of their data online for the first time ever.

Web 3.0, in the context of Ethereum, refers to decentralised apps that run on the blockchain. These are apps that allow anyone to participate without monetising their personal data.

Central to the industry's concern is the phasing out of third-party cookies: will something replace them? How will the current programmatic structure work without them? What is the impact on the industry?

For years, websites have been using cookies to track website visitors, collect data, and improve the user experience. The collection of data via tracking cookies has allowed marketers to target ads to the proper audiences. These cookies are also used to learn what users are checking out on different websites.

Where did it all go wrong?: The perfect storm for change

With numerous data breaches affecting millions of emails and passwords over the last decade, users have been at the forefront of the harsher side of digital data collection; many internet users can count on both hands the number of times they have received the notification on their phones or internet browsers that their passwords and data has been compromised. The contemporary, conscious consumer wants more control over their data, especially as they are witnessing its abuse and exposure on a regular basis.

The erosion of user trust from this kind of data breaching event and the recent introduction of new data privacy and protection laws, such as Europe’s General Data Protection Regulation (GDPR), have put data protection at the top of governmental agendas. Regulators are invested in protecting their citizens from fraud, hacks, and digital opportunism as the world becomes a digital economy.

A recent study investigated how users responded to different designs of cookie pop-ups, and how these various design choices can push and influence people’s privacy choices. Interestingly, it suggested that consumers are suffering with a degree of confusion about the cookie and its function, leading to general distrust of the term cookie itself. Some of the most shocking were the gaslighting cookie notices, popping up with mocking messages suggesting that by using the website, you’re consenting to your data being processed how the site sees fit. Next was the use of cookie walls with the trade of data for content — the user is essentially being held to ransom for use of their personal data. Overall, the conclusion was that if European web users were given an honest and genuine choice over whether or not they get tracked around the internet, the overwhelming majority would choose now to protect their privacy by rejecting tracking cookies.

The findings of this study highlight how significant a problem consent fatigue and consumer distrust have become within the existing system. The market seems to have become increasingly out of step with consumers’ expectations of how data is used, and looking at consumers no longer as individuals, but as numbers, clicks, and impressions. At the same time, it over inflates the value of data and of targeting of users and is rigged in favour of the big two. The digital ad market is neither delivering fair value to the companies investing in creating trust in news and entertainment, nor serving advertisers’ need to build desire and demand for their brands over the long term.

Google Chrome accounts for 66% of the global market share, making it the most widely used browser that allows both first-party cookies and third-party cookies. Unlike Safari and Firefox, Google does not intend to resolve privacy concerns by simply blocking third-party cookies, since the company believes that this will cause negative consequences that could impact the web ecosystem and users. So, currently, there is no definitive date for when alternatives may be put in place, leaving mass uncertainty for not only publishers and advertisers, but also for users, who are left to wonder when their data will be better protected and respected.

WHERE DO WE GO FROM HERE?

When faced with declining ad revenues, many publishers tactically increase the number of ads on any given webpage and partner with additional monetisation platforms. This has a negative effect on the user experience because it results in a barrage of ads and longer page load times. The scale of this problem is huge – the third-party JavaScripts used to deliver and track ads online accounts for 57% of overall execution time, and the top 100 domains account for 48% of all third-party requests, which has a direct impact on overall internet speed. If the top 100 URLs reduce third-party scripts, the entire internet will see a 2–3% performance increase. Furthermore, 36% of UK consumers have responded by installing ad blockers to reverse the negative effects caused by too much advertising.

The walled gardens — or centralised ad exchanges — that are commonly used today are part of the problem, as they create a series of high-cost transaction fees and operational inefficiencies. In order to improve the overall performance of the digital ad industry, there needs to be a solution that increases liquidity and decentralises control.

THE SOLUTION FOR PUBLISHERS, ALKIMI EXCHANGE: SOMETHING FOR NOTHING PROGRAMME

The Something for Nothing programme is the first of its kind in the digital advertising space and has been designed to enable publishers to increase revenue by reducing their reliance on centralised exchanges.

Here’s how it works:

● Publishers integrate a JavaScript tag or prebid bidder into their wrapper

● Alkimi then bids on these ad units, recording a verified ad impression within the Alkimi Exchange

● Publishers not only benefit from increased revenue but are also able to provide more valuable data to advertisers and establish deeper relationships. 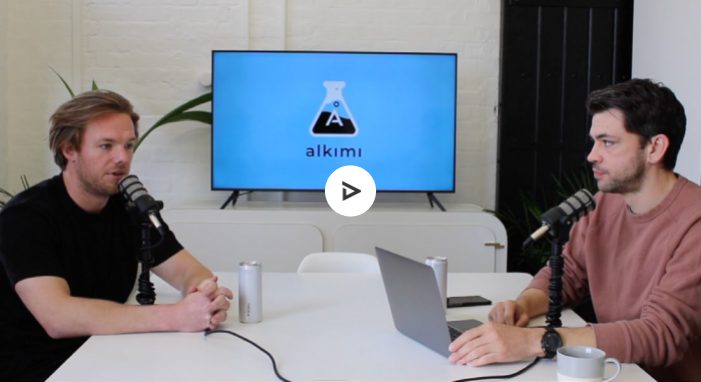