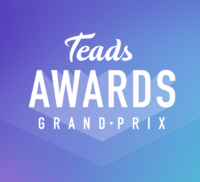 Teads, the Global Media Platform, announced the winners of the first Teads Awards Grand Prix. Judged by a prestigious panel of marketeers, the awards celebrate the best in mobile creativity from around the world. Judges included:

After 6 rounds of awards over the past 12 months, the Grand Prix Awards served to surface the best in class of mobile advertising. The winning creatives were selected from more than 3,000 submissions from 30 markets across US, LATAM, EMEA and APAC, making the Grand Prix  a true celebration of collaboration, creativity and innovation in the digital space.

Awards were split across 3 categories: Best Optimised Display, Best Optimised Video and Best Optimised Campaign through L’Atelier. L’Ateliers are Teads’ proprietary creative workshops - bringing brand and agency teams together with Teads Studio’s designers, developers and creative strategists in focused sessions. By bringing all key stakeholders into one session, L’Ateliers are a unique, energising, environment where digital assets can be matched against campaign KPIs and created in real-time.

Judge Meredith Herman, VP global marketing services, GSK, said: “This is a fantastic creative, highly impactful and arresting, really bringing the campaign to life. The idea is seamlessly translated into a mobile format. The visual pour of colour literally “lights up summer” stood out as a perfect example of a brand ‘show’, rather than a, ‘tell’ execution.” Congratulations to Pernod for doing such a good job at adapting the campaign for mobile. They nailed the ability to breakthrough with creativity that delivers a clear and compelling message.”

Through the 3D-like feeling and a fun story, they created a super simple and fun execution that makes feeding a pet very relatable within a dynamic video ad.”

Judge Justin Baum, creative director at Lenovo said: “This campaign had very strong branding in the awareness stage and clever use of the perspective with the bottle close-up and the person getting drenched sideways. Using interesting angles created an eye-catching start, then a simple and clear consideration message came to life across the suite of creative. Most importantly, Heineken demonstrated a simple, clear and impactful execution here which is critical for mobile activations. It was the best combination of giving the viewer a visceral feeling (of summer and refreshment) and showing what the product is (with the ‘Apple into the glass’) in a visually interesting way. The overall Strongbow atelier is really powerful, all units play with the intrinsic apple flavour and refreshing nature of the drink, really brilliant.”

For further information about the awards, including the full shortlist and links to all the creatives can be found here.