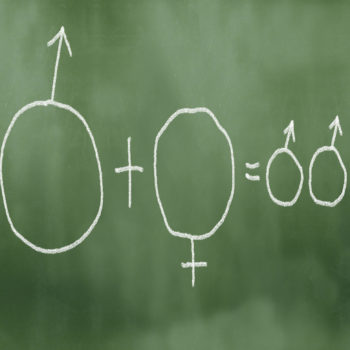 We are pretty opinionated at ExchangeWire, and we encourage opinionated conversation from our readership. We consider ourselves a forum for the industry to debate issues of the day, connected to the business of advertising and marketing technology. However, there’s one topic that you don’t hear much from ExchangeWire on – and that’s gender balance.

I’m not saying we’re silent on the matter – Becca Muir wrote a great opinion piece on the issue in our third edition of The Wire, and we’ve hosted ‘Women in Ad Tech’ networking events prior to ATS London and Singapore for the past few years. But I think it’s fair to say that we’re a little quiet on the topic.

And here’s why: achieving gender balance in our industry, or any other for that matter, is really tough and it’s not our core business. There, I’ve said it.

We had a massive debate about this last year in the ExchangeWire office (in fact, we wrote a post about it), where we concluded that if we’re an industry forum – a platform for the voice of the industry – then our core role is that of facilitator and moderator. Maybe that extends to commentator and influencer (depending on what you think of our opinions) but, crucially, our role is to always focus on these things within the context of adding value, rather than adding to the noise.

As a result, we’ve taken a quiet approach to the topic, feeling that we add value by facilitating conversation, rather than by being leaders of that discussion. However, now feels like a good time to highlight some of the opinions that we do hold about striving for gender balance in the advertising and marketing technology industry, what we do about it at ExchangeWire, and what we think ought to happen next.

We’re huge advocates of providing a voice to women in advertising and marketing technology, who are otherwise underrepresented in a male-dominated industry. We actively seek out female contributors and speakers for our content, always on merit. We’re routinely challenged by our readership and audience to improve the gender balance at our events, and we welcome the opportunity to stand up to that scrutiny.

However, the reality is that achieving gender balance across the industry is a task that depends on everyone; and the truth is that as long as the advertising and marketing technology industry is male-dominated, the speaker list at our events won’t be gender balanced. That doesn’t mean we’ll stop pushing for it to become balanced. But it does mean it will look like it does at ATS London this year: about 21% of the speakers are female, which is reflective of an industry where the breakdown for gender is approximately 75% male to 25% female. The stats on this are fuzzy and hard to pin down, but figures suggest only 22.5% of leadership roles in the major advertising companies (not specifically ad tech or martech) in the US are held by women, with that rising marginally to 25% in the broader media and communications industry. When looking specifically at technology, this figure drops to just 9%.

There’s a crucially important role at ExchangeWire events that we have allocated to some hand-selected people in the industry – and that’s the role of moderator. I don’t think this role gets enough credit, but it should and here’s why.

A panel discussion will fall flat on its face without a moderator who can confidently guide the conversation and give everyone involved a good opportunity to contribute. Without sufficient knowledge of the topic under discussion, this will look staged, at best, dull, or downright carcrash territory at worst. To have sufficient knowledge of most of the topics under discussion at ATS events, you need to really know your stuff.

We’re lucky enough to have some great in-house moderators and we are also constantly selecting suitably qualified moderators outside ExchangeWire – many of them happen to be women. I’m not patting us on the back for this, but I am saying don’t overlook it when you’re looking at a line-up of speakers on stage.

We have an employee gender imbalance at ExchangeWire – in the opposite direction from the statistical norm for the industry. We currently employ more women than men and our most senior roles are occupied by women, apart from our CEO. It’s not a policy – we employ the best person for the role at the time we’re recruiting; but it is noticeable and we will strive to maintain it – albeit with more balance towards men in the future.

Every other company in the industry needs to do the same – look at their recruitment policies and hiring approach and do everything they can to balance this up. This is a very broad area that involves a whole spectrum of related issues (qualifications, pay, working conditions, etc.) none of which I can do justice to in this short post. But what’s obvious is that leaders in this industry need to do more on this.

There are tonnes of initiatives and forums dedicated to the promotion and support of women in advertising and marketing (and beyond). In my opinion, this is a great thing as it only serves to make the conversation more mainstream. Partly, as a result of all the fantastic work achieved by these initiatives and forums, it feels like it’s now time to widen the conversation and to start talking about the broader definition of diversity, and what the industry is doing to support this.

By diversity within the industry, I mean that we need to start seeing an industry that represents the wider world that we live in, with people taking up roles at all levels throughout organisations in our industry, regardless of gender, sexual orientation, race, age, and physical ability.

In a previous career – which feels like a lifetime ago now – I worked for a range of public sector organisations in both the UK and Australia. They were all enormously more diverse than many companies in this industry and that wasn’t just to do with the mechanics of the job function (eg. typically female-dominated occupations like social work and teaching), but rather a systematic approach to employing a workforce that was reflective of the world we live in.

That could explain why our industry is still so male and white but, either way, it’s time to make that a regular topic of conversation, in the right forum.

ExchangeWire will be hosting a networking session focusing on this topic, prior to ATS London on Monday, 11 September: ‘Women in Leadership – Diversity in Advertising and Marketing Technology’. It’s free to attend, but you have to register beforehand because space is limited! Come and join the conversation.