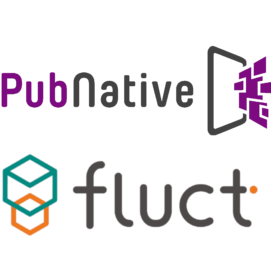 fluct serves over 39 billion impressions to 15,000+ affiliated media partners on PC and mobile every month in Japan. PubNative (HQ Berlin, CEO Ionut Ciobotaru) is one of the few independent mobile SSP and programmatic ad exchanges. This partnership will serve the interest of major EU brands using EU DSPs by allowing access to Japanese consumers.

“There has been significant interest for a long time for PubNative to break into the Japanese market. With the success of this partnership, we’re looking forward to expanding the relationship that would serve as a bridge between Japanese advertisers and our US or European publishers in the future.”
– Ionut Ciobotaru, Founder & CEO of PubNative

fluct is a leading solution company providing full support for the monetisation of internet media traffic. The company was established in June 2008 to respond to the growth of the display advertising market. As part of CARTA HOLDINGS, INC., the company’s main aim is to expand the advertisement supporting business. Based on confident experiences fluct has built, the company will surely expand the possibility of technology through flexible ideas created aggressively. fluct aims to be the most reliable partner by listening closely to publishers and by quickly creating the services they need.

PubNative is a mobile monetisation platform that enables app publishers to execute and enhance their revenue strategy through flexible ad units. With its proprietary cross-format optimisation technology and mobile “header” bidding solution, PubNative empowers mobile publishers to maximise their programmatic advertising revenue. The company is headquartered in Berlin, with a satellite office in Beijing. On top of that, investment firm Media and Games Invest plc (MGI) Group acquired PubNative earlier this year. MGI also owns a gaming publisher interested in the Japanese market.