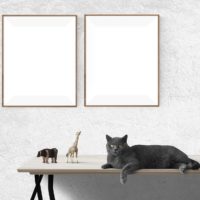 What do you do when the entire structure that acted as the foundation of a multi-billion dollar industry collapses in on itself? It’s not an easy question to answer. And an even more difficult problem to solve. But that’s where we are as an industry right now.

The third-party cookie was the measurement and targeting currency for the better part of twenty-odd years. And now that currency is about to be taken out of circulation.

I still think people in the industry haven’t quite grasped what is coming next. Display advertising will be forever changed because of privacy. Retargeting is done. And the always dubious view-through metric is being forcefully retired.

Mobile marketing, too, will be severely affected with the introduction of ATT, reducing the ability of marketers to track and measure ad spend across Apple iOS. Omnichannel attribution is going to get harder.

A quick - but important word - about programmatic

And what happens to programmatic, specifically on mobile/desktop web, in the privacy-first world? I think this is worthy of a separate post in itself. But I took a crack at this question in a prediction piece in 2019 - where I put forward the concept of the PIE (programmatic is everything) doctrine.

All media will become automated in some shape or form, so it’s necessary (for survival) to be holistic about programmatic, thinking at an omni-channel level rather than niche display. Maybe it is time to invoke the spirit of BOK and talk about ‘programmable’ rather than ‘programmatic’.

This will help ad tech evolve beyond the straitjacket of impression-level banner buying - as it is highly likely that a lot of the real-time display infrastructure will become redundant over the next 12-24 months.

Why pay the costs of cookie-matching tech when it won’t be possible?

It is right to assume that this is an existential crisis for SSPs and DSPs. But I think this is also the perfect opportunity for both to own either the buy side or sell side - unseating the retreating omnipotent Google as ad tech’s top dog.

Time to reframe how we look at the industry

Before you abandon your retargeting ad net to pursue a business-saving pivot, we all need to understand where companies sit in the greater digital marketing ecosystem. The current crop of industry maps are redundant now that third-party cookies and IDs are going away.

I believe privacy and media fragmentation are separating out the industry into three main areas: 1) the service layer; 2) the madtech middleware; and 3) the digital media and commerce landscape. This is outlined in my graphic below.

Sure, display advertising is dominated by both - but the ecosystem is much bigger. In the graphic below I have broken out the three aforementioned layers in more detail.

Over the coming weeks, I will be covering these three segments in separate posts. Today I am going to focus on the ‘service layer’. 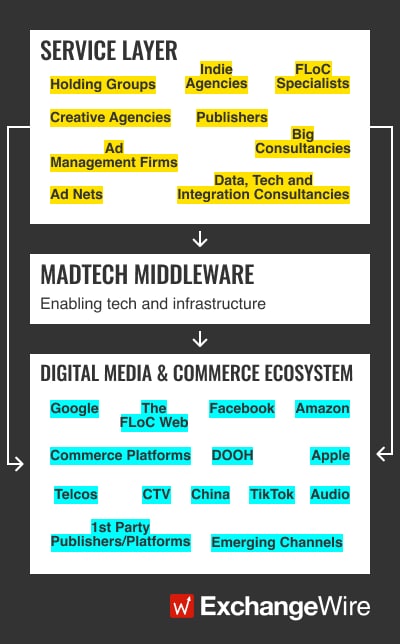 With the increasing fragmentation of the media and commerce ecosystem, the service layer will become even more important this decade. There is no real replacement for the third-party cookie. We will have a patchwork of solutions.

Buyers are going to need attribution and targeting strategies across an increasing mess of walled gardens, market ecosystems and commerce platforms. It’s only going to get harder.

Let’s look at the key segments that are likely to be the go-to for marketers in the service layer.

The holding group model seems to be under constant attack by industry observers, the markets, and one very angry former CEO. We have been told that the problems are too big to fix: their commercial model is challenged; they are being disintermediated by the mega walled gardens; and they are not capable of delivering for clients in the digital age. It feels like a self-fulfilling prophecy, doesn’t it? It’s an overreach. Holding groups are probably the most malleable companies in this business, evolving when they have to. They still have global scale. They offer brands an unrivalled view across the privacy-first ecosystem. Fragmentation will push brands back to the holding groups.

In a fragmented digital commerce and media ecosystem, specialists should thrive. And it is messy out there. There will be a few large-scale indies able to compete with holding groups - but overall it will become very resource intensive to be an omni-channel offering in a post-cookie world. Better to double down on verticals like commerce, CTV, China, DOOH, or audio. There are plenty of options.

Creative will be even more important now that one-to-one marketing is moving to one-to-many. This could be the decade when creative agencies merge creative brilliance with data-driven insights, using ad tech in the management and optimisation of clients’ creative assets. There is going to be an almighty scrap for the high-margin creative production and management business (S4Capital is a testament to the value creation in the space). Creative agencies are in a good position to take advantage.

Google’s FLoC (or iteration) will become the currency of the Chrome anonymous web. Many brands and agencies will aggressively lean into it to help measure and target display campaigns. I don’t ever see Safari or any other browser adopting Google’s offering. I also think programmatic display ad tech will consolidate on the execution layer as buyers bypass redundant cookie-matching tech in favour of more effective and privacy-first delivery/optimisation. FLoC specialists will emerge to help buyers trade across the FLoC web. What they would look like is still unknown, but this looks more like a service layer function than tech.

Deloitte, Accenture et al. will continue to skirt around the fringes, offering beautiful ‘digital transformation’ powerpoints and their RPA solutions (like the lucrative back office Excel automation scripts). None of them seem interested in the media buying business, which will become even more important going forward.

I see a whole new breed of service-layer offering emerging, that leverages the ‘madtech middleware’ and internal capabilities to help brands/holding groups build robust attribution, platform integrations, and data management/execution functions. Examples of these companies include: Silverbullet, Keppler Media, Hybrid Theory, Canton, Chalice, The Programmatic Advisory, Sparrow Digital. I also see the auditing firms muscling in on this market. It’ll be competitive but it’s going to be high growth.

Putting ‘ad networks in the service layer might seem odd to some. But there has always been a grey area around their category. The service layer seems appropriate given the strong media-management element to their business. The model will continue to thrive as holding groups and brands outsource buying. Again, it will likely have an overdependence on the ‘FLoC web’ - but as I said before, most buyers will look for the easy option optimising against the ‘Google’ metric. The VAN (Vertical Ad Net) model will be popular in a world where it will become more difficult to aggregate audiences. There will be new ad nets offering specialisms across the anonymous web outside of FLoC, optimising to more brand-friendly metrics - like the Ozone Project in the UK.

Mid-to-long-tail publishers are likely to give up on trying to monetise their sites; instead they will outsource it. These companies will manage all monetisation and ad tech on the publisher properties, and will depend on FLoC to deliver campaign performance and revenue for publishers.

In a world where you can’t use cookies to build unique audiences, I can see bigger and scaled publishers building media solutions for agencies and brands using their own first-party data and mix of unique inventory and cookieless targeting/measurement. I also see more publishers partnering with tech vendors to build SME-focused solutions, winning business off the walled-gardens.

Next time I will be talking about the ‘MadTech Middleware’, and why the future of this layer will be about tech enablement as opposed to outsourced media buying. It will become more difficult for companies in this layer to build revenue on outsourced IOs - especially if they don’t own media or have proprietary first-party data.

Ultimately, the move to this new privacy era is removing these cookie-era ad tech businesses from the value chain. What happens next will be a big discussion point at this year’s ATS London. If you are interested in taking part in this debate, be sure to get your ticket for Europe’s elite digital marketing conference.