Alphabet Inc. (NASDAQ: GOOG, GOOGL) yesterday (27 October), announced financial results for the quarter ended 30 September, 2016. Google remains the company’s strongest business, while there were also increases in revenue for its ‘Other Bets’ segment.

“We had a great third quarter, with 20% revenue growth year-on-year, and 23% on a constant currency basis. Mobile search and video are powering our core advertising business and we’re excited about the progress of newer businesses in Google and Other Bets”, said Ruth Porat, CFO of Alphabet.

The following summarises results for Google compared to all other Alphabet businesses (Other Bets) (in millions; unaudited):

Google’s online ad business continued to thrive during the third quarter. Its dominance has been solidified in the transition from web to mobile, and the growth of the Android operating system, YouTube, and investments in smartphone apps for maps, email, and photo storage.

Despite the fact that cheaper mobile adverts (relative to desktop) mean the amount Google gets once users click on ads has fallen, these results show mobile-ad prices are catching up as the smartphone becomes the primary computer for many users. 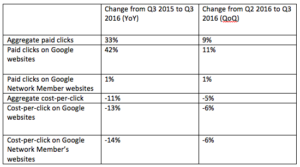 Average monthly active users (MAUs) were 317 million for the quarter, up 3% year-on-year and compared to 313 million in the previous quarter. Average daily active usage (DAU) grew 7% year-on-year, an acceleration from 5% in Q2 and 3% in Q1.

Twitter also announced a restructuring and reduction in headcount of approximately 9% of its global workforce. The restructuring, which focuses primarily on reorganising the company’s sales, partnerships, and marketing efforts, is intended to create greater focus and efficiency to enable Twitter’s goal of driving toward GAAP profitability in 2017.

“Our strategy is directly driving growth in audience and engagement, with an acceleration in year-on-year growth for daily active usage, Tweet impressions, and time spent for the second consecutive quarter”, said Jack Dorsey, Twitter’s CEO. “We see a significant opportunity to increase growth as we continue to improve the core service. We have a clear plan, and we’re making the necessary changes to ensure Twitter is positioned for long-term growth. The key drivers of future revenue growth are trending positive, and we remain confident in Twitter’s future.”

In response to Twitter’s Q3 earnings Tom Bailey, ‎regional vice president at Marin Software, said: “The surprise decision to move the earnings call has placed further scrutiny on Twitter. This quarter has not been the horror show some expected.

“The platform has been in an on-going battle to monetise its platform without alienating its loyal user base; Jack Dorsey even came back to turn things around. Dorsey is working hard to attract advertising budgets by broadening its advertising options, opening up more audience data and launching new capabilities to reach users, but, ultimately, as the share price has shown, it has been a struggle.

“With a buyer on the horizon, the future looked positive. But without a suitor, and the necessary  financial backing and expertise to invest in tools that support marketers in reaching their target audience, the next quarter could present more challenges rather than answers.”