The adoption of real-time advertising in the UK and Europe is becoming mainstream. Effective real-time bidding (RTB) campaigns have been running at scale for a number of years, however this buying method is now the first choice for online performance campaigns, and major advertisers are starting to issue RFPs specifically for programmatic media buying and analytics services, something that was unheard of 12 months ago.

The following report was researched and written by Infectious Media using aggregated and anonymised campaign data from Impression Desk. The findings, whilst specific to Infectious Media, represent work carried out for clients spanning all industry sectors with differing objectives, budgets and target audiences, which may be indicative of industry wide trends.

The German-speaking “DACH” countries and the Nordics have the top-valued inventory in Europe, commanding the highest CPM impressions. Austria has come out on top, with Denmark and Finland closely following. In the second tier are Switzerland, Germany, Sweden and Norway.

Contrasting these strong prices are the countries of the south and west of Europe. Spanish and Italian CPMs have both slipped against the rest of Europe, with conflicting growth in Portugal seeing it overtake its Latin neighbours for the first time. Overall, Eastern Europe has continued its relative weakness in CPMs against the rest of Europe. Two notable changes in the region are Turkey, dropping back to an equivalent level of CPM to the rest of Eastern Europe; and Poland, increasing at a rate that brings it up to a level approaching Germany.

Across Europe, the gap between the highest and the lowest CPM countries is becoming more pronounced. Market forces are driving these changes, but unlike a commodity market, not all impressions are made equal. Data, context and position can all play a part in increasing prices, and as more premium inventory is sold on the exchanges the average price will tend to inflate. 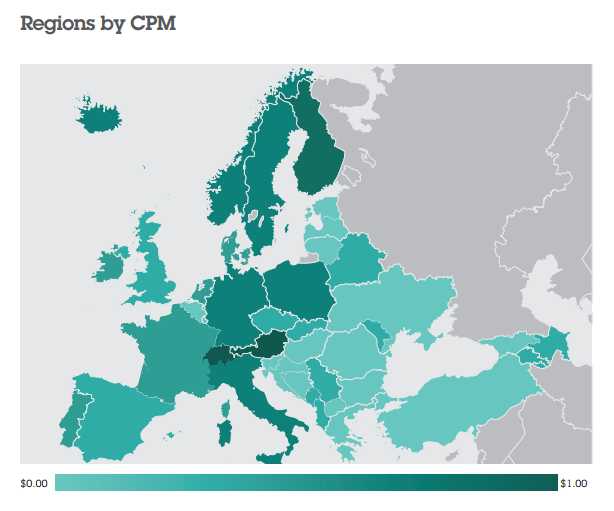 European CTRs, CPCs and CPMs are seen below in comparison to the UK market. Recent EU CTRs have been turbulent, with a general trend towards a slight lowering of response rates over the summer period. In both the EU and UK, CPMs rose towards the end of spring but then decreased over summer, this may suggest seasonality in buying patterns across these European markets.

CPCs change in accordance with the shifts in CTR and CPM. In the EU, dropping CTRs, combined with an increase in CPMs, saw a spike in May, which was quickly mitigated by an increase in CTRs in June and July. In contrast, UK CPMs and CTRs mirrored each other leading to a relatively low and consistent CPC. We might expect to see an increase in CPMs in the next period in the ramp up to Christmas, with an accompanying increase in CTRs for the festive buying season. 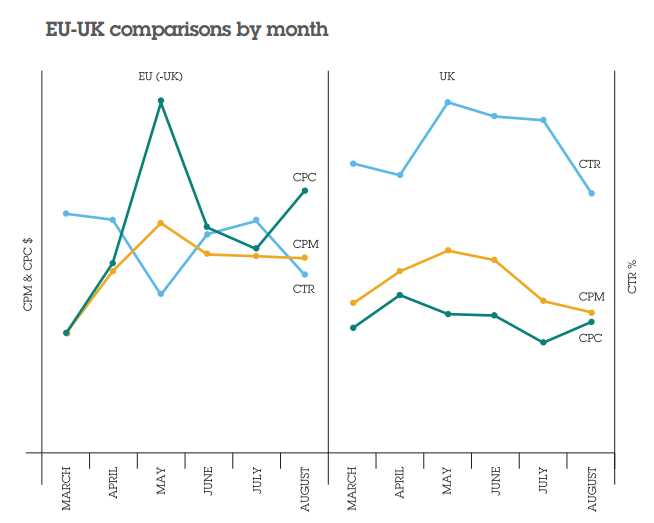 A Measure of Viewablity – Is It Worth It?

Looking at the diagram below, all the regions in Europe demonstrate a strong correlation between increase in frequency of seen-impressions and CTRs. This points to each impression having a cumulative effect on a user’s tendency to click on an advertiser message. Different regions show varying levels of effect, but even in the lowest-performing region, users shown 10 adverts increased their click rate by 10 fold.

While all regions demonstrate an improved click rate per impression with the switch to the seen-impression, the greatest difference was in Eastern Europe and Germany, where the CTR at 20 seen-impressions is four times higher than with standard impressions. 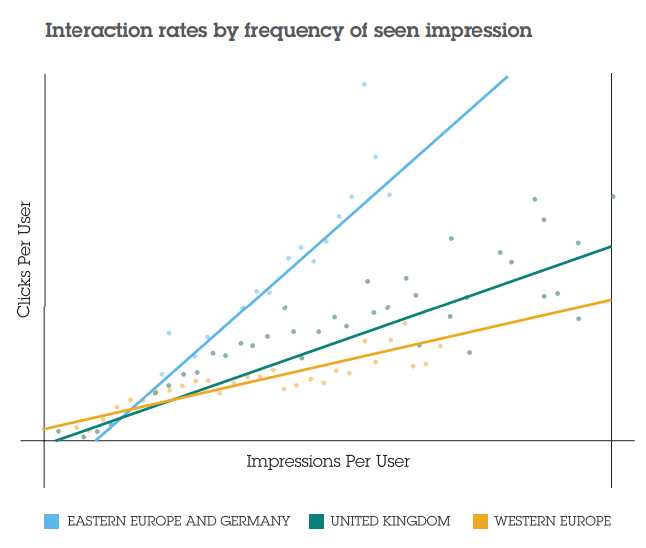 Brand marketers with cross-border campaign objectives would ideally be buying in countries where publishers are supplying inventory that delivers high-viewing times per impression. Ireland, Italy and France have shown an increase in user time on a page of over 35%, a significant change, whereas Denmark has seen a massive drop of over 70%. These outcomes could be the result of seasonal changes in browsing behaviour, or reflective of changes in the quality of RTB inventory in these countries. 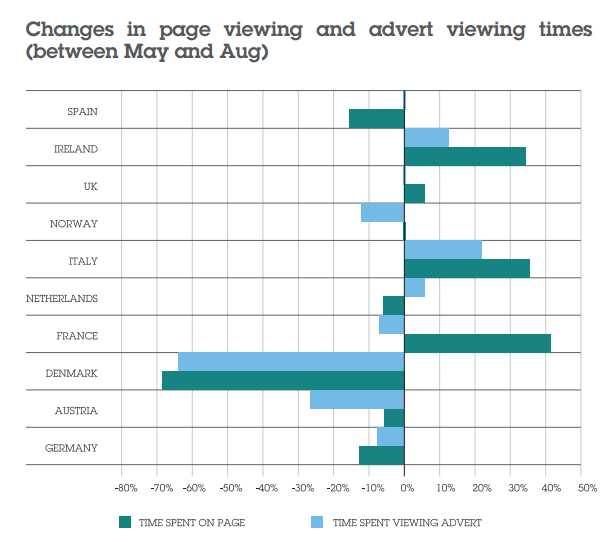 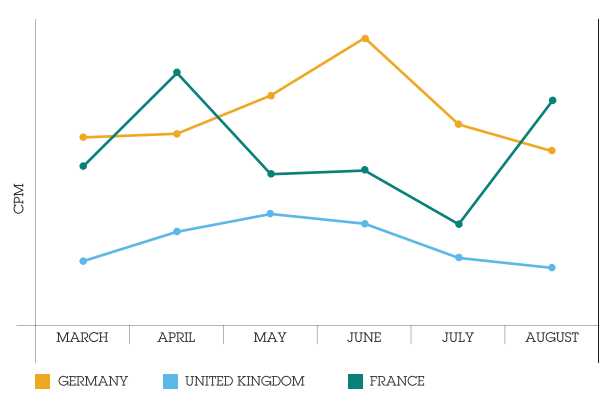 French prices in the above graph are consistently above those of the UK market, and on a par with Germany. A look over the last four editions of the Infectious Media Insight Report shows the relative stability of French CPMs in comparison to Europe as a whole.

The graph shows a fall in CPMs in the run up to the summer break, then with a sharp increase in August in the ‘back to school’ season. While there is definitely a seasonal effect being seen here, it is not clear whether this is an artefact of the planning cycle or reflects the intrinsic ROI achievable from the inventory.

The map opposite shows CPM consistency across the French regions.

The main outliers are Paris and Cote d’Azur, where the higher bid price is a possible indicator of better performance in these regions. In general, the third quarter of this year has witnessed a period of increasing awareness of real-time display advertising. The momentum in France has been building with the opening of La Place Media, a large consolidated premium inventory source; eBay, Facebook and Orange announcing the opening of ad-exchanges; and the partnership between 24/7 RealMedia and the Microsoft Advertising Exchange. France is rapidly catching up with the leading markets in Europe.

Sylvain Deffay Country Manager France, Infectious Media, comments: “This upgrade in inventory could not come at a better time for French advertisers, who are under pressure to maximise their ROI in a tough economy. We now need the demand side to step up, as retargeting is still the primary use of RTB in France. While this is a great first step, it is limited to a small part of the sales funnel, maybe only 10 to 15% of the whole process. For success across all marketing objectives, from awareness to CRM, the demand side needs to be working the data harder, producing smarter algorithms, and making the messaging more relevant. The winners in this space will be those able to innovate to gain a competitive edge, throughout the funnel.”

German prices in the graph below are on average highest of the three RTB marketplaces. The CPMs show a distinct increase in the spring and early summer period, followed by a corresponding drop in July and August. With demand in this period peaking in June, it will be interesting to see how the trend changes in the run up to Christmas. 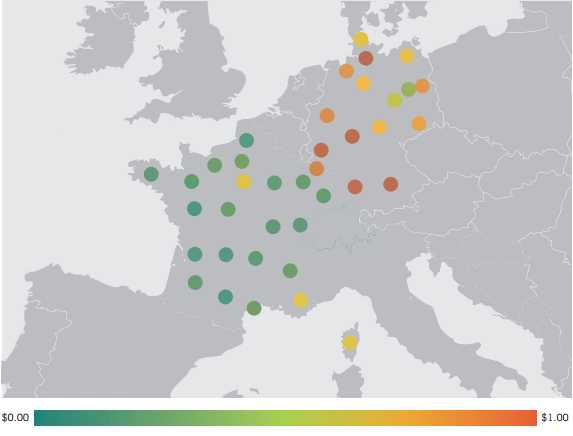 In the graph above, southern Germany and Hamburg have the highest CPMs, this mirrors the high revenue areas of the country and reflects how audiences in Germany are being targeted. This contrasts the minor variation seen in France, and seems to indicate a difference in how campaigns are being run in these two countries.

In the past 12 months, RTB activity in Germany has been increasing rapidly, with a multitude of new players entering the market. However, according to an Adtech survey at dmexco this September, only 20% of buyers and advertisers attending were buying though RTB. It seems from buy-side enthusiasm, and relatively high prices, that demand is outstripping the supply.

It is widely recognised that the German sales houses control online display supply, with premium inventory at scale not available through RTB. This control is seen to be necessary to protect the CPMs obtained through traditional buying. There is also a supply-side perception that “there is no new money” to be had by moving into RTB.

What is not being taken into account is the value-added aspects of RTB. Inventory where a person can be reached and provided a tailored, relevant message is more valuable to advertisers than buying in the traditional manner. In addition, online media investment is growing at a faster rate than any other media, with display the fastest of all. This is being driven, in part, by efficiencies inherent in the RTB market. The influx of data on the online consumer is driving innovation, better targeting and more efficient spend.

Ultimately, advertisers are looking for a return on their investment, and the current model in Germany does not appear to be creating the best value for advertisers. However, we are now seeing a tipping point. Germany`s real-time industry has a healthy mix of local and international companies on all sides: demand, service and supply. This make-up is helping to push the importance of the RTB agenda and demonstrate the benefits to all players.

Stefan Beckmann, Country Manager DACH, Infectious Media, comments: “The most important aspect of this year’s dmexco exhibition for me was witnessing early-adoption advertisers, who have already seen impressive real-time advertising returns, coming together with premium publishers, now readying themselves to take on RTB. The new entrants to this market can now use their experience to drive buy-side innovation in the German real-time economy.”

The maps below show the level of CTR by UK region in the Olympic period. Increases in CTR are tracked as the dots change from red to green as per their scale.

The first map shows a relatively high CTR base-rate for the pre-Olympic summer period, which quickly transitions into decreased CTR at the Olympic start point. As the event continues into August, the CTRs are further reduced, to levels that are unusually depressed for the season. Some UK regions are exhibiting rates that are 30% of what they were only a week before. The last map shows post-Olympic CTRs already beginning to recover.

A study of this kind can have complicating factors, like changes in the weather, holiday periods or advertising objective. However, considering the level of British enthusiasm for the Olympics, it is fair to assume this shift is attributable, at least in part, to the event. These results may be traceable to changing browsing behaviour and less engagement with certain sites or activities, or it may highlight a change of focus towards offline media. The takeaway for advertisers is they need to plan for these kinds fluctuations around international events. 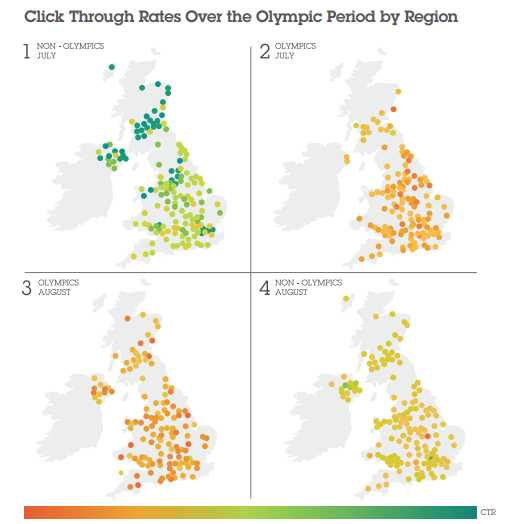