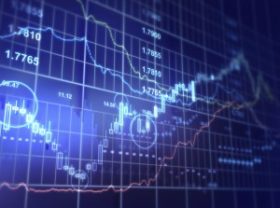 The definition of an ad network has for some time been ambiguous. ExchangeWire is no stranger to voicing its perspective on who is or isn’t an ad network. This piece doesn’t intend to go over old ground, but it’s worth looking at the newer generation of companies providing a trading service.

Twelve months ago, when agency trading desks began to consolidate spend, the steady demise of ‘ad networks’ was predicted. Despite the progress made by the agency desks, nothing in this industry ever stands still. The marketplace has continued to shift, and there remains doubts about whether the independent trading specialists have developed a stronger trading capability. They’re the ones on the back foot. They’re often bootstrapped and they live and die by their performance output – more so than the agency desks. For them, it is simply a case of innovate or die. This is not to suggest the agency desks are not innovating too, but fuelled by a highly competitive environment, the trading specialists have begun to demonstrate the value they provide above and beyond what an ATD brings to the table. In an environment where nearly every publisher is engaging one way or another in programmatic selling, the liquidity (in developed markets) is at such a point now where more than one provider working on a client’s strategy can provide a service. Value is being added by those who know how to execute – those who know how to develop their own data sets and generally garner competitive advantage from the ability to do this in a transparent fashion.

A few weeks ago, it was announced that Gamned was acquired by LeadMedia Group. The biggest takeaway from the acquisition was that strategic buyers still exist for those providing trading-led services with a degree of transferable technological assets. While Gamned was not strictly considered a ‘platform’ business, it was considered a service-led business with a degree of proprietary technology; a business strategy engineered around solid trading-led technology principles and executed by a smart team. Most platform businesses have been forced to build walls between that of technology and service, which is primarily a consequence of their financial investment strategy. For those building trading-led service businesses, most have been bootstrapped and taken on little or no outside funding. It is generally accepted that the exit multiple involved in a services business is less than that of a technology business, there are still plenty of acquisition opportunities for these trading specialists.

Do European trading service businesses represent an economically sensible option for strategic buyers? Versus some of their US counterparts, they likely represent much greater value and there is not exactly a shortage of potential options: Infectious Media, MEDIA iQ, YD, Matiro, Bannerconnect, GDM and ClickDistrict. It is hard to determine the revenue count on some of these businesses, versus companies that have scaled in the US, but let’s assume for the time being they have a lower price tag (which may not actually be the case with a couple of them). To outside buyers what is important to know is whether the business foundations they have built can be scaled and applied into new markets. It has become widely believed that European trading specialists are more advanced than some of their US counterparts. It is a sentiment that has been echoed by the likes of Appnexus previously and it is a reason why certain platform companies that still operate a managed service outsource some of their more difficult US campaigns to their European hubs.

“The rise of programmatic buying over the past couple of years has put margin pressure on ad networks and affiliates. As a consequence, a number of them are under growing pressure to diversify their business models in order to sustain their competitive advantage. It could be a smart strategic move for a few of them to acquire trading desks – it would give them access to brand budgets, more advanced data and analytics expertise needed to execute programmatic campaigns efficiently, and opportunities to build more valuable strategic relationships with their clients than simply being a point solution.

“As for larger online retailers, whilst they are becoming more data-savvy, I doubt they will see much economic value in acquiring trading desks at this stage. However, large media conglomerates and the more traditional data analytics companies could see significant value from having their own proprietary trading desk offering. It would allow them to leverage their existing data assets and/or analytical expertise more efficiently in this growing programmatic advertising market.”

Alongside the Gamned exit, there have also been acquisitions made by DataXu and Interactive Media (Mexad and Xlposion, respectively) which underlines the premise that trading expertise in key Europeans markets is still highly sought after.

Who Could Be Buying?

If looking more broadly than simply a business that buys RTB-enabled inventory, there are numerous types of strategic buyers who could, and should, be looking to acquire companies that excel at data-driven advertising, have developed an infrastructure to compute lots of data; understand how to fuse multiple data sets and activate them and have the capability to analyse trends and patterns. This type of business has numerous options open to them, some topline examples are provided in the table below: 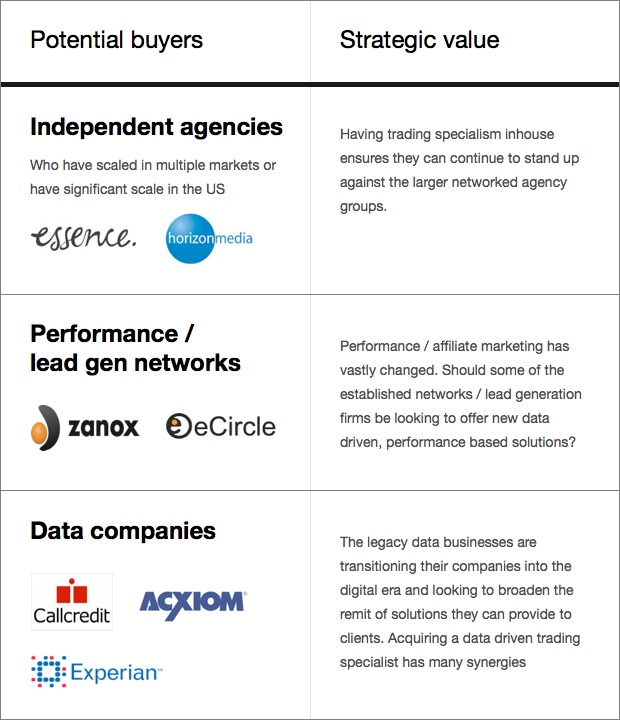 At this stage it is worth ending on how and why these trading specialists have managed to establish themselves. Quite simply, they adapted more quickly than the incumbents. There were memorable times three years ago where ad networks dismissed real time bidding. They saw it as a niche method of media procurement that was unlikely to disrupt the legacy method of upfronting remnant inventory from publishers. Suffice to say, they were wrong.

Questions should be asked why didn’t traditional ad networks make the leap of faith earlier or, indeed since then, why have they ignored the growing expertise the independent trading desks have amassed. In most cases now, independent trading desks outperform the more traditional ad networks and this is because RTB is now the predominant point of performance difference.

Traditional ad networks were great at product. They developed their own ad servers, developed their own ad matching engines, realised the commercial benefit of leveraging audience data for targeting purposes, built some algorithms that had to balance the needs of clients and their performance goals with the needs and expectations of publishers to whom they were guaranteeing volume. They got in early to Video, etc., but quite simply, their failure to transition to the new protocol of media buying hindered and stunted their growth.

Is it too late for them to get back in the game?

Perhaps not. Let’s look at Yahoo! for a second. Yahoo!’s M&A strategy, thus far, has seen it stump up M&A funds for mobile/social widgets. Business Insider has taken it upon itself to predict which ad technology investments Yahoo will make (clearly Blodget and co must know more than Yahoo-soothsayer Kara Swisher, a feat in itself).

The likes of Turn, PubMatic, Rubicon, et al, have all been subject to this speculation and rumour about possible acquisitions. But why? Yahoo! still sells a network product. It acquired Interclick to bolster its data management capabilities and supplement its existing vast data sets. So why would they now want to buy up an excessively large platform business? Why wouldn’t Yahoo! make a much smaller investment in a trading specialist, and put this business into the heart of its own network product? Leverage it to activate those vast data sets, but only this time it would have a team, better equipped and experienced, to execute in the world that is now ‘real time’. It isn’t as glitzy as a SaaS business – which would doubtless put off shareholders – but it would certainly help kick start its struggling network sell.

In short, trading specialists are labelled the next generation of ad networks, and perhaps they are. However, they are still clearly proving that innovation through trading can still add value, and as some of the recent European M&A action would suggest, there are still buyers out there looking for these types of companies.