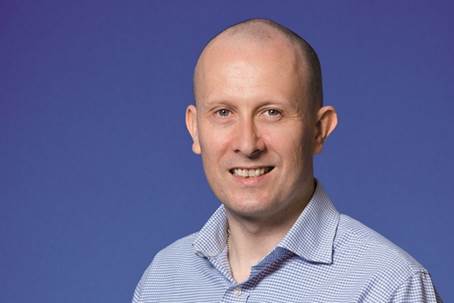 Brand safety should weigh heavily on every marketer's mind as should contextual advertising, so why are 'bad ads' still popping up frequently today? Gregory Armshaw, head of application strategy at Graymatics recalls the day he nearly lost his job over a badly placed ad and discusses the need to start thinking seriously about context in any media buying exercise.

You wouldn't place food ads in the bathroom, advertise washing powder at the nightclub, or market lingerie at school. As programmatic budgets increase, marketers need to make sure they consciously plan the context of their advertising and set budget aside to ensure context is safe.

Why is that important? Well, I almost got fired because of a contextual brand safety incident immediately after the death of Princess Diana in August 1997. GM was running a piece of creative for a new car model which only standout feature was air-conditioning, and the creative copy featured some criminals keeping a dead body cool in the back of a car. This ad ran alongside a story about the car crash that killed Princess Diana.

I was the commercial traffic manager of a large national broadcaster in the UK and it was my job to maintain the commercial output. Complaints flooded in berating the perceived bad taste and rightly questioning how the ad was allowed to be broadcast next to news about her death.

Fast forward today, despite the massive revenues--US$21bn in programmatic advertising in 2014--and the fantastic data centric automation of the buy process, there is little investment in ensuring ads at least do not cause loss of reputation and perhaps secondarily are congruent with the content being consumed. The technology exists to accurately 'signal' the meaning of text, images, and videos on a page--thus, excluding or encouraging ad delivery on that page and, for the more sophisticated tools, determining the creative used. Organisations like Sizmek, for example, offer semantic analysis of text on webpages (called Peer 39) and DoubleClick has contextual targeting capabilities.

Such technology, if used, would have stopped a horrendous ad placement of a Singapore Airlines ad next to a story about the recent TransAsia Airways crash (see screenshots)...Yes, I'm interested in flights around Asia but I don't want to buy them while reading about a plane crash. 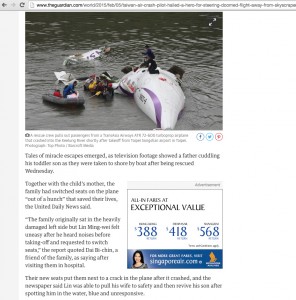 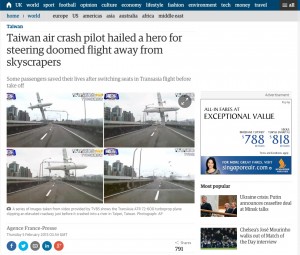 This involved a big advertiser, Singapore Airlines, and appeared on a premium publisher site, The Guardian, so we are not talking about organisations that cannot afford to invest in ensuring a premium experience for their customers.

Even Facebook has opened up their relevance score to show advertisers how relevant their ads are to their target audience.

Increasing access to data is enabling cost effective response to customers demanding personalisation. Brands leaders such as Coca-Cola, Adidas, and Motorola already are selling bespoke products. In display, a personalised relevant ad is one that is not only correctly targeted, but also one that is congruent with its environment. Why is the second important part of this recipe being forgotten or ignored?

Has media become inextricably separated from brand values? Surely if the media budget is traced back to its source, there is a senior marketing person signing off on the spend while, at the same time, staying awake at night worrying about brand love. Does that CMO stop thinking brand when signing off on media budgets? Maybe the actual final ad placement is so disconnected from the marketing department that marketers feel powerless to influence the placement environment.

It seems bizarre to me that CMOs can walk out of a meeting discussing the budgets they plan to invest in content marketing to then sign off a media budget that care little about the 'free content' within which display ads are placed.

In 2012, according to a survey by Google, 94% of display advertisers said they got better results when combining audience and contextual targeting. Programmatic spend in 2014 in the US accounted for 45% of all display ads, up from 13% in 2012. With programmatic established and scalable technologies available, isn't it time brand owners re-exerted their will on this and insisted on a certain quality of environment?

Invest in your brand's reputation by setting KPIs around environment and demanding your agencies report on the context of your advertising. Obviously this will cost more, and you can either increase the spend or slice a small percentage off your current spend to invest in it.

As we move towards mobile, the most personal of devices, we cannot afford to be so lackadaisical with context. Out of place ads on mobile devices feel more like a poke in the arm than just some misplaced web flotsam hoping for an eyeball. Also, as our content curation apps become ever more beautiful with glorious images tempting clicks, we have to ensure our ads are not so ridiculously out of place that they are actually scorned, or worse, blocked. There are technologies available to derive the meaning and content in images and video programmatically such as that provided by Graymatics.

ExchangeWire's Ronan Shields talked about the developments around native display ads and the work that Open X is doing to help make that is a reality. These are all encouraging signs of a re-establishment of contextual importance and, thus, driving creative content.

The technologies to position contextually relevant 'native' creatives exist and they are not expensive to implement. It is important to note that contextual relevance is also the first step to brand safety. As marketers we need to ensure we are targeting the right audience, in the right place, with the right message. Just because programmatic feels inexpensive doesn't mean we should neglect any of these tenets. Make sure your agency is engaging with platforms and partners that deliver brand safety and contextual marketing offerings as well as delivering the audience.

Back in 1997, I didn't get fired. The ad got pulled, the advertiser got a debrief, and complaints from the audience eventually stopped. It did, however, leave an indelible mark in my mind as to how important context is for advertising.