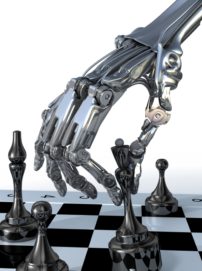 In association with Xaxis

3 November, 2016 marks the third year of the Xaxies Awards in the UK – the annual awards held by Xaxis to celebrate the best of programmatic technology and advertisers’ campaigns. This year, Simone Giertz, 25-year-old inventor, robotics enthusiast, and YouTube star from Stockholm, Sweden, who has been featured in Mashable, on The Late Show with Stephen Colbert, and in the New Scientist, has been invited to judge the ‘Most Creative Use of Data’ category. Ahead of this, Xaxis and ExchangeWire caught up with Giertz to find out what compelled her to get into robotics and how she thinks automation will continue to change our daily lives.

Giertz started out studying engineering physics at university, but it wasn’t necessarily this that spurred her on into building robots: “When I dropped out of college, my robotics interest was still a couple of years’ out.” She decided at the time, to start working as an editor for Sweden’s official website, Sweden.se. She also dabbled in the startup world and spent a year studying at creative business school, Hyper Island in Stockholm; it wasn’t until after that she fell in love with the concept of using robotics and automation.

Giertz conceives of ways to simplify daily tasks through building contraptions to take on some of the seemingly mundane chores and showcases her varying levels of success across social media, with often hilarious consequences. One of Giertz’s excessive creations include ‘The Chopping Machine’, which she built because, as a lifelong vegetarian, she was bored of constantly chopping and dicing vegetables. As she explains on her blog, what started out as an innocent vegetable chopper soon turned into a potential killing machine.

Despite Giertz’s extreme approach to automation, she believes it generally is an incredible development and will improve quality of life dramatically for humanity. 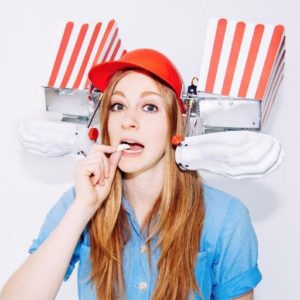 Automation drives the marriage of elements and formats, which have previously remained staunchly separate, such as data working alongside creativity. The automation of advertising is helping to bring these two different worlds together to engage consumers in a way never before deemed possible. It also provides unprecedented scalability. Gone are the days, where programmatic was viewed in isolation as a cheap source of inventory for low-budget direct-response advertisers – creativity in programmatic doesn’t, and shouldn’t, just refer to the visual creative, but the creativity in data usage and this is exactly what Giertz will be judging at this year’s Xaxies Awards. The creative use of data powers next-level advertising campaigns, proving how an advertiser can truly target the right audience with relevant messaging, in the right place at the right time – at scale. Creativity in data marks the difference between annoying consumers and engaging with them. It also acts as an enabler for social stars, such as Giertz, to have a platform.

For Giertz, the power of automation in advertising provides personal education: “I find it incredible how much algorithms can teach us about ourselves and our consumer behaviours.” An interesting stance and one that shows how advertising affects the millennial audience. Young consumers are taking notice of how they are targeted and building a greater understanding of the ‘why’ behind it.

When asked how the millennial generation react to brands’ increasing adoption of technology to engage with them, Giertz responded: “Not at all. To us, it’s status quo.”

So, what is Giertz’s generation engaging with? What is most effective in advertising? Giertz believes influencer marketing to be a powerful tool. “Working with influencers is definitely one of the most effective and up and coming ways to advertise”, said Giertz. “I don’t trust a brand telling me that they’re great, but I will trust somebody I follow and like and who is familiar with a product’s opinion.” The success of influencer marketing highlights the broader power of content marketing more generally. In an environment where consumers are becoming increasingly disenchanted with the hard-sell of advertising, content marketing allows them to feel engaged and not targeted. The wide and far-reaching coverage of Giertz and her impractical contraptions highlight the power of trust and third-party recommendations, giving advertising the opportunity to become a medium for storytelling, adding value to people’s lives. It channels the famous Howard Gossage quote: “The real fact of the matter is that nobody reads ads. People read what interests them, and sometimes it’s an ad.”

Giertz is part of the future; and that future points increasingly towards artificial intelligence (AI). Many of us interact with AI, probably without even realising it or giving it a second thought. It has arrived in our lives more organically than the sci-fi movies may depict and we may have imagined. Robots aren’t walking down the streets, but with self-driving cars a reality, the Internet of Things powering the capabilities of turning our fridges into connected devices, and the AI market set to grow to USD$5bn (£4bn) by 2020, how does Giertz think AI will continue to evolve? “I think AI will have a finger in almost everybody’s life.” And it’s AI’s predictive capabilities that make it set to become a firm favourite in the world of programmatic. AI has power over data, programmatic execution, reporting and creative personalisation, so it’s not hard to see why.