Demand for audience data is growing

Between Q4 2014 and Q4 2015, the amount of money spent on audience data has increased by 154% in Europe. That is the conclusion of Eyeota’s first Annual Index. The audience data provider has identified the data trends based on their agency clients’ campaigns utilising Eyeota’s profiles across 60 countries.

The three top-selling sectors, both in Europe and in the UK, are Finance, Automotive, and Electronics & Computers.

Electronics & Computers’ advertisers nearly tripled their spend in audience data from Q4 2014 to Q4 2015 – a general global trend. In the UK, advertisers invested primarily in B2B data in order to reach IT decision makers, the study found.

Overall, 63% of all data purchased in the UK was sociodemographic.

“There was a major uptick in programmatic ad buying in 2015, but campaigns are only as good as the data underpinning them”, says Kevin Tan, CEO, Eyeota. “The results of the year-on-year comparison not only allow us to understand seasonal trends in data purchasing, but the rate at which the demand for data is rising worldwide. This reflects the increasing importance that audience data plays in empowering advertisers to connect with audiences on a human level.”

This growth in ad spend is attributed to the general surge experienced by mobile advertising (37.9% growth), online video advertising (34.7%) and social media advertising (29.8%).

Looking back on 2015, the Carat study reveals that advertising increased in all regions, with Western Europe experiencing the lowest growth rate of 2.8%, North America at 4.3%, APAC at 3.6%, while LATAM had the strongest growth with 11%. 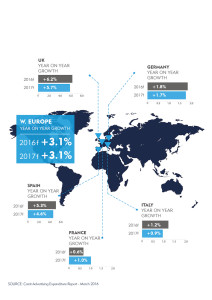 The Western European growth can be mainly attributed to growth in the UK and Spanish markets, the study finds. Advertising spend in the region is expected to continue growing consistently at an estimated 3.1% in 2016 and 2017.

Carat’s ad spend forecasts are compiled from data which is collated from around the Carat network.

Ad spend is increasingly being moved to smartphones and mobiles, following the consumers who are now spending more time and attention on mobile devices than desktop. This is reflected in mobile’s share of spend, which grew almost 50% from 33% to now almost half of all budgets, the Marin Global Online Advertising Index claims. 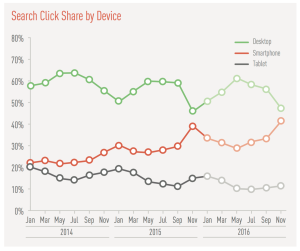 John McNulty, vice president global marketing, Marin Software, comments: “Last year’s data is a clear sign to any advertiser who may be on the fence about mobile investment – now’s the time to understand and act on the benefits of mobile’s moment.”