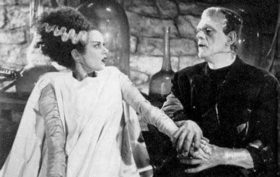 The ‘data crunchers’ and ‘creatives’ have historically been on polar opposite ends of the advertising industry spectrum, but as the digital era advances to a chapter marked ‘big data’ this is starting to change, as ad agencies more commonly associated with Cannes Lions than ATS London start to change tack.

The media industry is going through an era of unparalleled change as digital, and data (particularly ‘big data’) become must-haves to been seen as fit for purpose, and creative agencies have proved no exception.

It wouldn’t be too much of a stretch to describe the pairing of the two as an odd match. Only last year Bartle Bogle Hegarty founder Sir John Hegarty (the guy behind all of those iconic Levi’s commercials) bemoaned of a “creative deficit”, due to an over-reliance on modern technology.

This is just one example of may ‘traditional creatives’ harking back to an era when they were simply entrusted to come up with ‘the big idea’, the theory being that data-led advertising is just not conducive to creativity.

But this is not the prevailing sentiment, as forward-thinking agencies are using programmatic technologies and data analysis to deliver improved real time ad campaigns, including informing the creative process.

Is data and tech fuelling a creative deficit?

Agencies that have built their reputations based on their creative output are starting to use data and analysis at the very core of their campaigns, and in some cases setting up entirely new divisions to ensure the marriage between data and creativity are firmly embedded.

Dylan Mouratsing, Manning Gottlieb OMD, Evidence Director, says the attitude of data and creativity being like oil and water, are fast becoming outdated.

“Mad Men-style unilateral decisions, based on little more than a focus group of one, have largely been consigned to history. One common misconception is that use of evidence straightjackets creativity,” he says.

“This is something traditionalists struggle with, and it’s a process of education to get away from that. One of our central beliefs is that using the body of data that’s available on a given project doesn’t lead to less creativity, but actually creates a more fertile ground for original work.”

Another outfit with a similar mindset is Iris London, which has a unit within its fold called Iris Concise, which took to the stage at this year’s Cannes Lions conference to imbue delegates over the use of data in the creative process.

Ben Essen, Iris, head of planning, says: “The idea of data and creativity has been around for a while. We’ve found that the best insights come from data analysis, and you can go and create an output from there.”

Damian Glover, Iris Concise, director, says: “We have a team of data analysts and strategists that work with the rest of the teams. They help with mining clients’ data to try and identify new target customers, and make the financial case for the brief.”

Both Essen and Glover agree that data-led thinking is key to coming up with effective creative. “Data can help you ask a whole new questions, from there you can go on and create groundbreaking work,” says Essen. “It’s part of the new creative skill set.”

“When we find what areas to focus on, then we can let the creative minds get involved,” adds Glover.

Manning Gottlieb’s Mouratsing agrees, adding that it is difficult to think of one area of advertising and marketing that is not affected by data-driven decision making.

“Idea generation is better with stimulus, and if we can, for instance, use social buzz monitoring to understand potential buyer’s opinions, motivations and behaviours, this can only be a good thing. This complements tried-and-tested approaches, like popping out for a mystery shopping trip, or meeting the consumer face-to-face in a focus group session,” he says.

“Further along the creative process, the right type of testing can validate, develop and hone work to make it even better before it reaches the public.”

Ciaran McConaghy, Fabric, marketing solutions director, explains that much of his company’s work now involves helping with the creative process.

“A lot of times we’re asked to look at things like whether or not a creative asset is effective, and if the client needs to invest in a new one, or maybe even to utilise existing ones in a different way. For smaller clients [with less budget] this is important”

Mouratsing adds that such testing is important, especially when budgets are becoming ever-more squeezed. He says: “In-campaign, clients are seeing the benefits of dynamic creative optimisation and multi-variant testing, to fine-tune work and ensure we don’t squander budgets with inefficient creative.

“For instance, we know that split testing different taglines in a live scenario is a far more efficient way of deciding effectiveness than spending hours trying to pre-empt the market.”

All parties consulted agree that this use of data also helps increase clients (who ultimately say ‘yes’ or ‘no’ to a campaign) to sign off on their ideas.

‘Ideas’ still have a place

Essen says: “Clients love evidence and proof, and data makes it easier for a client to buy the idea. It’s no proof that it will work, because creativity always requires some sort of leap of faith. When you’re creating something new, an element of that is always required.”

Mouratsing explains: “A data-led approach is by its nature more transparent than following a number of creative leaps from concept through to delivery. If we’ve done our jobs properly this should make the solution we’ve arrived at self-evident as being the right approach.

“This approach works best when the client can trace a clear line from what the data told us, through to the strategic interpretation, and right into the implications for how the brand should behave in the marketplace.”

However, Mouratsing also says that data alone does not guarantee a successful campaign; intuition and a flair for a ‘good idea’ still have a place.

“There is still room for some creative ideas to stand alone, where adequate evidence is impossible or impractical to gather,” he says.

“The takeover of the OXO Tower for PlayStation [one of Manning Gottlieb’s clients] is a good example of this, when the London icon was changed to represent the PlayStation symbols for the PS4 launch.

“The press and social media impact of it was huge, but going into it there was very little objective way of quantifying the potential impact compared to, say, a paid search campaign. This is when it is important to understand the limitations of the body of data, for all stakeholders to innovate, and then learn from the experimentation in as many ways as possible.”

So are such progressive attitudes towards injecting the traditional creative process with data widely held, or are the nay-sayers like Sir John Hegarty still in control of the average creative department?

“I’ve heard of more hold-outs among other businesses, though, where some hold on to their way of working without data to support them,” says Mouratsing.

“This may have served them brilliantly well for years or even decades. I see this as a failure to recognise a massive opportunity, arising from the new context in which we work.”

If such ideas can be more widespread, we will see the narrative on programmatic move away from just ‘bottom of the funnel’ retargeting, and into more nuanced strategies around real-time branding, further channelling more spend into the coffers of ad tech.

This topic will be debated at ATS London where panelists from ad agencies DigitasLBi, Neo@Ogilvy and Essence will offer their insights.