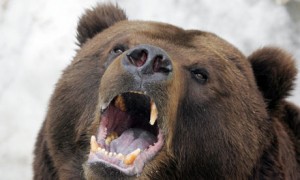 Venture Capitalists and "tech" trade press types have been salivating over the potential of the Russian internet market for some time now with an avalanche of posts offering some unique perspective. Given the hot air that perpetually emanates from both parties, you'd be forgiven for disbelieving the hyperbole. However, the numbers and demographics definitely do support the premise that Russia will come to dominate the European internet market.

So how will this big growth affect the data-driven ad market in Russia, and who will be the key players? Before we look at the principal players in the real-time advertising space, let's run through the numbers for those uninitiated with the great Russian internet bear.

- Russia has the largest internet market in Europe, with 53 million users online and a 14% y-o-y growth. Compare this with the slow growth (averaging 2%) in mature markets like Germany, UK and France, and you'd expect Russia to leap even further ahead.
- The digital market is expected to be $1.2 billion (about €930 million) by the end of 2012. Obviously, it doesn't compare in terms of size to France, UK and Germany, but the market is growing at a clip.
- The display market is expected to hit $518 million by the end 2012, and rise to $621 million in 2013 – a jump of 16%. This would put it into top five markets in Europe. At that growth rate, it could easily be a top three market by 2014.

(All these figures are courtesy of GP Bullhound and IAB Europe.)

Now that we have digested the numbers, let’s look at the key players and trends in the market:

Yandex is one the most successful technology companies in Europe. Having gone public in 2011, the company is now doing about a billion in revenue. The company is the leader in search with over 61% market share (Google has a quarter of the market). Early this year, Yandex announced it was making inventory on owned and operated sites available to the market through RTB.

In an interview with ExchangeWire, Nikolay Danilov, Head of Display Ad Services at Yandex, outlined the strategy in the real-time space. Much of the available inventory will be available across its display inventory.

On the DSP front, Yandex seems to have built its own solution to give buyers access to its RTB-enabled inventory. It is also integrating with third-party technology and providers. Will Yandex sell in its own DSP into the local agencies and holding groups? That would be the smart move to tie up spend and increase margin from buyers in Russia and elsewhere. Time will tell. If you want to play in the Russian market, you will need to be buying from Yandex.

Will Yandex, with all that free cash flow, look to expand outside of its core market? In display? The M&A bankers are hoping, but it's too early for acquisitions in Germany, France and in the rest of Europe – and there’s likely to be no big purchases until it has a fully-formed RTB strategy in its own market.

Regardless, there will be a huge trend over the next twenty-four months of cashed-up Russian internet companies buying ad tech solution providers throughout Europe (particularly in the UK, France and Germany), as they look to move beyond their core market. There are at least two-to-three companies (ad servers and networks) in the CEE region and Turkey that Yandex could take out - especially if it is serious about building a business beyond just Russian search revenue.

You could imagine Yandex buying a retargeting solution with decent DCO tech and market penetration (in Europe and elsewhere). There are some real bargains beyond the billion-dollar valued Criteo. If it were serious about really taking on Google, then why not ape its DoubleClick strategy and acquire an adserver strong in the markets where it is looking to expand?

Oleg Tinkoff is one of the most successful business men in Russia. He’s already sold his brewery business for €167 million. He also has a thriving credit card business in Russia, Tinkoff Credit Systems, which he is looking to IPO in the next twelve months. The initial float could raise $500 million.

Tinkoff has now set his sights on the growing digital advertising market. Two months ago, he raised a round of funding of $20 million, which included Goldman Sachs and his own investment vehicle, for the new ventures. Headed up by a number of senior figures from the Russian advertising market, it is expected Tinkoff Digital will launch a DSP and SSP solution to service the growing Russian RTB market.

Speaking to ExchangeWire at the recent ATS Paris event, Tinkoff indicated that the new solution would be live in the first quarter of 2013. It will be interesting to see how the new proposition will persuade local publishers to accept third-party tags given the reluctance so far, but then demand is growing – and the new venture might kick of adoption among publishers.

The Demand Is Coming From Retargeters

The agency trading desks are doing little buying in Russia. Early days? Maybe. Or just another cultural minefield that will be difficult to navigate in the short term before they find their stride? The reality is that in the first instance of growth, much of it will come from retargeters.

Local e-commerce is growing fast – with online purchases expected to rise to $26.7 billion. With that kind of spend, you can be sure there will be retargeters (native and international players) looking to grab market share. myThings and Sociomantic have already opened offices there and are growing market share.

Let’s not forget about the local players. Retargeter, a personalised targeting solution, run by Oleg Nazarov-Bruni is also making waves in the market. Don’t be surprised to see countless more providers pop up, as the market matures. I suspect that there could be a huge opportunity for local players to offer data-driven buying solutions across the purchase funnel, as trading desks slowly set up shop in Russia.

While the holding groups are still setting up their trading desk strategy in Russia, it would be foolish to discount their potential to influence the data-driven display market, given that they own most of the big agencies there. This will give international ad tech players a backdoor into a fiercely insular market. Leveraging global deals will only get you so far. It'll be interesting to see how the plan develops from there - and how they move beyond the safe confines of the holding group deals. You have to think that Google will be strong in this developing market, as it will doubtless lean heavily on its holding group contracts. Others will no doubt have a similar strategy.

Mail.ru, A Behemoth You Can’t Ignore

Mail.ru is the one company standing in the way of Facebook’s complete dominance in Europe. Mail.ru dominates the social media and email markets in Russia. Much of its monetisation strategy is inspired by Facebook. Given the relative success of FBX, you have to wonder how long before Mail.re follows suit. With a boat load of inventory, will Mail.ru look to capture some of that lower funnel budget? Automated selling could be huge for Mail.ru, as it look to open up new revenue streams. There are no immediate announcements about a real-time offering, but you can speculate that Mai.ru will roll something out in 2013. APIs at the ready.

IPONWEB: If You Build It They Will Come

IPONWEB is very much an international company, having built a strong business in APAC, Europe and North America. But its development core is based in Moscow. IPONWEB is the company that builds ad technology for everyone. It has arguably some of the best engineers – outside of maybe two or three companies – in the business. Already in 2012, five of its clients have been acquired in sizeable M&A deals. There is a good chance that, as the market grows in Russia, IPONWEB will be at heart of much of the technology build.

2013 is likely to be the break-out year for the Russian data-driven market, but it is likely to be dominated by local vendors (and of course Google). We look forward to hosting the key players from the local ecosystem at our first ATS Moscow event in July of next year. The great Russian real-time revolution is just about to get started.